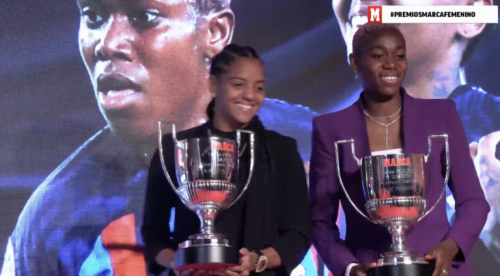 In Spanish football, the Pichichi is awarded by the sports newspaper Marca to the top goalscorer of each Spanish Primera Division Women League season. All top scorers who preceded the award’s creation were retroactively named Pichichi winners by Marca.

Asisat Oshoala played a major role as Barcelona were crowned Liga champions for the third time in a row and seventh overall after winning all 30 of their games in the season, an unprecedented achievement in the league’s history. In August of this year, the former Rivers Angels forward became the first African woman to be nominated for the Ballon d’Or féminin.

Oshoala is the sole record holder for the most awards the CAF Women’s Footballer of the Year has won (5), and the Pichichi is another award for her remarkable personal collection.

Our @AsisatOshoala picked up the Pichichi Award for the top scorer for her 20 goals with @FCBfemeni. Congratulations Champ pic.twitter.com/dhfgFZ2YhR

The 5 times CAF Women Footballer of the year adds another personal accolade to her cabinet. pic.twitter.com/jBvlJM5kOD