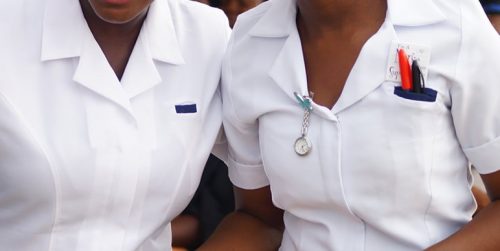 The nurses left the country in 2021 for greener pastures in other countries, according to records from the Nursing and Midwifery Council of Nigeria.

The Lagos State branch of the National Association of Nigeria Nurses and Midwives, NANNM, quoted this statistics on Wednesday, while decrying the acute shortage of nurses and midwives at the state and local government levels.

The NANNM members said they are overworked, noting that a nurse has to cover a 20 bedded ward on a shift, run 24 hours or even 48 hours shifts to attend to patients.

The Chairman of the association, Olurotimi Awojide, urged the government to recruit nurses and midwives to remedy the situation.

He stated this at a press conference tagged: “The Agonies and Pains of the Caregiver; Nurses Deserve Better”.

According to Awojide, the mass outward migration of nurses due to poor working conditions and remuneration packages has increased the burden and pressure on those still within the system.

He said the workload was currently affecting the quality of care the nurses provided and the patient’s health outcome.

“This has as well led to needless death and chronic illnesses among their members in Lagos,” he added.

He further said the primary health care level at the local government was most affected.

He regretted that government at all levels has continued to demonstrate indifference to the unfortunate development and in certain instances even encouraged it.

“We have observed that the replacement on exit policy of the State government in place is not sufficient to cater to the high level of attrition among nurses and midwives.

“The remuneration package and the high cost of living have simply made employment with the Lagos State Government uncompetitive. It is reasonably expected that with a high percentage of the GDP and economic activity in Lagos State and the pressure on the healthcare system to care for over 20 million Lagos residents, the remuneration package should reflect the burden we bear including the economic realities and the cost of living,” he said.

He noted that the state has continued to lose its experienced and well-trained nurses to both foreign labour migration and internal migration to federal hospitals within and outside the state.

“We expect Lagos State to pay higher than even the Federal Government of Nigeria considering its status.

“We are requesting that a retention allowance to incentivise nurses and midwives from exiting the service be included in the emolument packages,” he stated.

He called for the provision of living quarters for nurses and midwives within the hospital and interns, adding that their work schedule and certain peculiar vulnerabilities required accommodation arrangements within the hospital facilities or proximal to it to be provided to ease the many difficulties with trans and resolve safety issues.