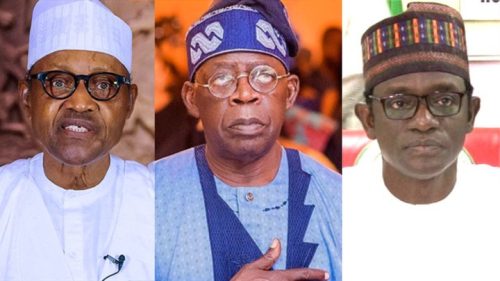 Moves by President Muhammadu Buhari and the national leadership of the ruling All Progressives Congress (APC) to pick the presidential candidate of the party for the 2023 general elections by consensus arrangement has sparked concerns of a major crisis within the party, Daily Independent has gathered.

Party leaders, who spoke with Daily Independent on Thursday, said with events that played out at the meeting of APC governors with President Buhari in Aso Villa on Wednesday, there is a strong indication that the presidency is planning to foist its preferred aspirant on the party in the name of consensus arrangement.

According to one of the party leaders from the South-West, who spoke on condition of anonymity, it is now clear to them why President Buhari extended the tenure of Governor Mai Mala Buni as the national chairman, Caretaker Extraordinary Convention Planning Committee (CECPC) and even insisted on him when majority of APC governors rejected him as the party’s acting national chairman.

During his meeting with the governors, the president, who declared his preference for consensus candidates during the national convention billed for Saturday, directed that “all those who have bought forms indicating interest and have been dropped should have their money refunded without delay”.

According to him, “As I remarked when I met Your Excellencies on February 22, our aim must be to hand over to an APC government at the centre and the great majority of states. We must not, by default allow the PDP to get its dirty hands on government again and return us to the Stone Age.

While sharing his thoughts on the outcome of the meeting, the APC leader from South-West said from the look of things, the president will also want to insist on a consensus presidential candidate after the national convention, a move, he said, may spell doom for the party.

“I wasn’t surprised at all when I was told the outcome of the meeting and the president’s directives on consensus candidates, especially the position of national chairman. That is what they have always wanted all along. They supported the rebellion against (Adams) Oshiomhole and brought in Buni to help stabilise the party for just six months. In less than three months, Buni will clock two years in that position.

“They have been mooting the idea of consensus presidential candidate for a while and it is fast becoming a reality. The president pretends to be indifferent to APC matters but in the last minute, he will step in and say ‘this is what I want and that is final’. That is not good for our democracy and I expect party leaders like Tinubu, Akande, Onu and others to speak out now”.

Also speaking, another chieftain of the party said stakeholders in the party may not agree to the idea of a consensus presidential candidate as it will deprive party members the choice of picking the best.

“I don’t think our members will buy the idea. Even President Buhari never emerged through consensus in 2014. There was a presidential primary conducted in Lagos which he won. In 2019, there was also a primary but that is not a serious one because as the sitting president, many people knew he will want to seek reelection.

“But in 2023, he is not contesting and a new person entirely will emerge. We need to get a popular candidate and put our best foot forward for the election. I am not saying the president cannot endorse a particular aspirant. He can do that but that aspirant must contest in a primary with others, he cannot emerge by consensus which is more of imposition. If he wins the primary, then good luck to him”, he said.

It would be recalled that last month, Borno State governor, Babagana Zulum, said that the 2023 presidential candidate of the APC will be determined by consensus, saying the party will rely on President Buhari, its governors and other party leaders “to decide on who emerges as the presidential flag-bearer of the party.”